Ever wanted to view the annual migration of the Wildebeest?

Then now is the time – explore this Tanzanian Safari.

Arrive at Kilimanjaro Airport where a friendly safari team will wait to take you to the town of Arusha for an overnight stay at Lake Duluti Serena Hotel. 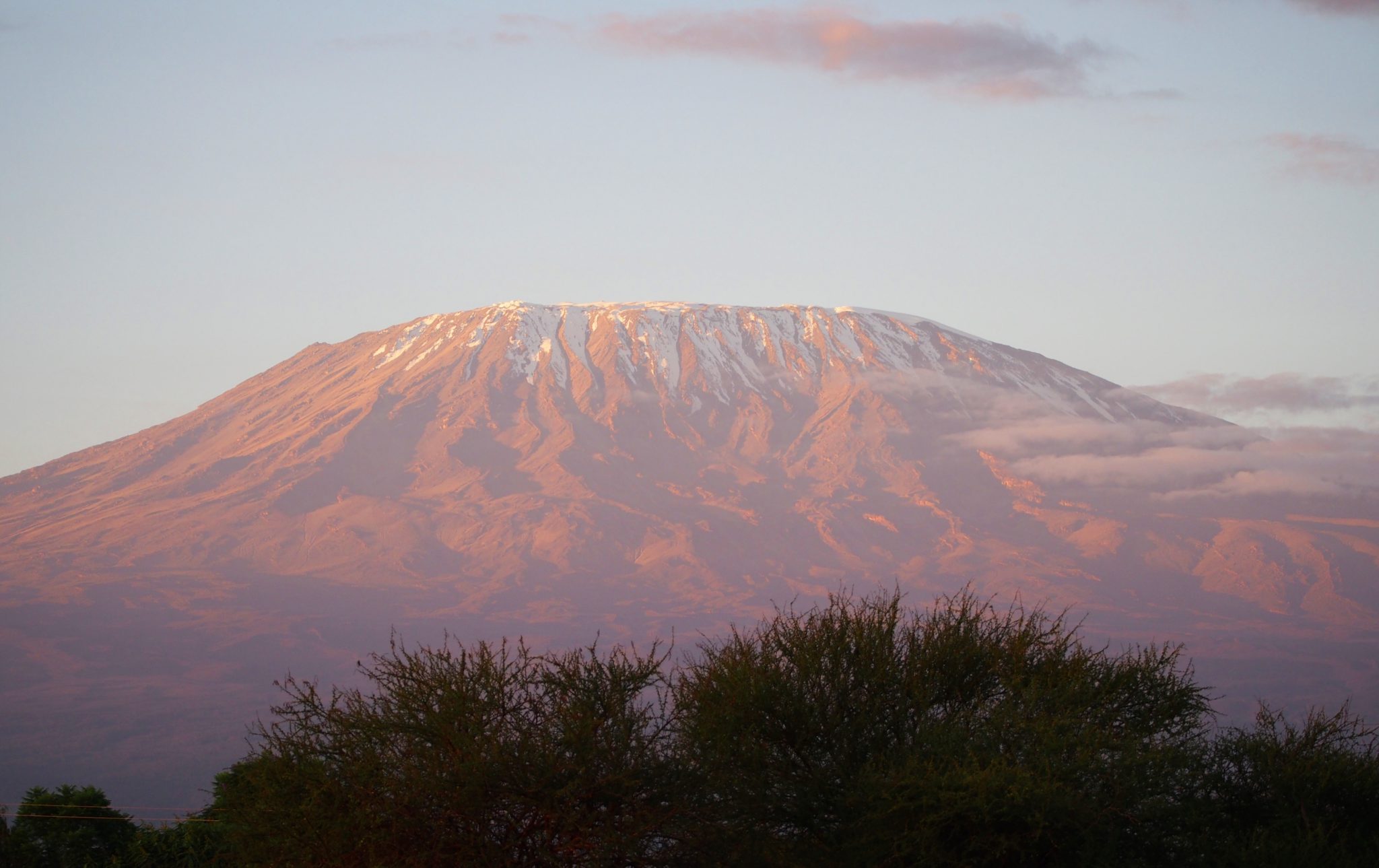 After breakfast head towards Lake Manyara. Do an en-route last minute shopping in Arusha and then drive through the local town of Mto wa Mbu (Maasai for Mosquito Village – only place in Tanzania which represent all the tribes in Tanzania – 120 ethnic tribes) to Lake Manyara National Park followed by an afternoon game drive in the park with a picnic lunch.
Overnight at Lake Manyara Serena Safari Lodge.

Lake Manyara National Park
The park includes a variety of habitats, making it possible to sustain a wealth of wildlife in this relatively small area. The main habitats include the shallow soda lake itself, which occupies 70% of the National Park total area of 320 sq. km, the ground water forest, open grassland, acacia woodland and the rift wall. The famous tree-climbing lions are the most famous spectacle in the park, so look out for Simba and family lazily lounging among the branches of the acacia trees. Hauntingly beautiful Manyara is also home to herds of buffalo, elephants, leopards, baboons, impala, giraffe, zebra, wildebeest, ostrich and hippo. Popularly referred to as an ornithologist’s paradise, Lake Manyara National Park contains over 400 bird species found in most savannah and river habitats in East Africa. 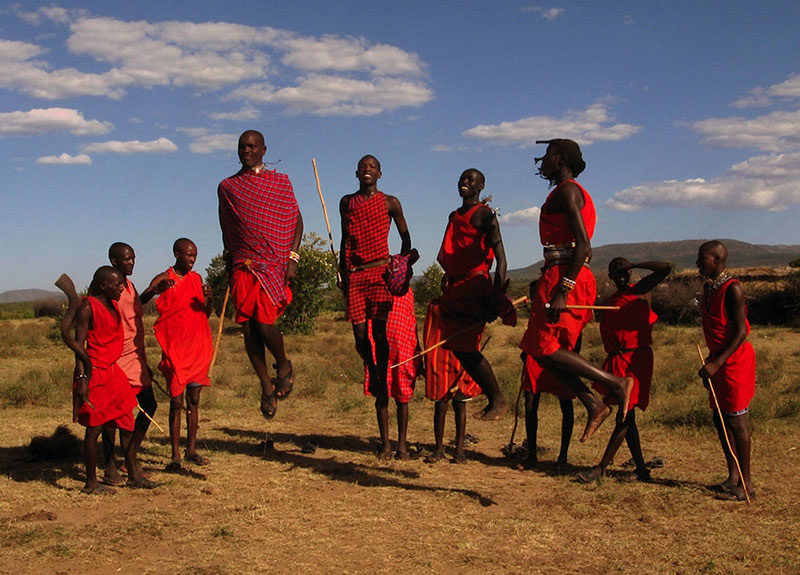 After breakfast drive to Ngorongoro Crater to descend 600 m into the magnificent crater for a game drives. You will witness an unforgettable spectacle of African wildlife – a world teeming with animals. Supported by a year round water supply and fodder, the park supports a vast variety of animals, which also includes the black rhino. Another big draw to this picturesque park is it dense population of predators, which includes lions, hyenas, jackals, cheetahs and the ever elusive leopard. We will enjoy a picnic lunch down in the Crater. You will also drive through the haunting forest and feast your eyes on some of the most spectacularly green vegetation you will ever see. Later in the day, you will ascent to the crater rim for the drive to your lodge. Overnight stay at Ngorongoro Serena Safari Lodge.

Ngorongoro Crater
The Ngorongoro Conservation Area covers 8300 sq. km, of which the renowned Ngorongoro Crater only makes up about 3% – equal to approximately 260 sq. km. The conservation area also encompasses the volcanic area around the Ngorongoro Crater including the still active volcano of Oldoinyo Lengai and the famous Olduvai Gorge. Its centerpiece, the Ngorongoro Crater, is the largest unbroken caldera in the world. It is often referred to as the eighth wonder of the world and the first sight of it is truly breathtaking. Standing on the edge of the crater, you have a postcard view of picture perfect clouds floating above a deep purple crater ring. And in the bowl below Africa has spread a patchwork blanket of greens and pinks dotted with animals. The crater floor houses a big population of varied wildlife, including the almost extinct black rhino. Animal densities are high, and game viewing is excellent. You will be able to get “up close and personal” with the animals.

Serengeti National Park
The Serengeti covers a vast area of over 14,763 sq. km and is home to the most spectacular concentration of game found anywhere in the world. Its wild, untouched beauty is the subject of many great books and films. It is Tanzania’s largest national park and boasts the big five as well as over 35 other species of game animals and an astonishing selection of bird life… The legendary migration adds to the uniqueness of the park, with well over a million animals stampeding across the plains, usually during April, May and June. 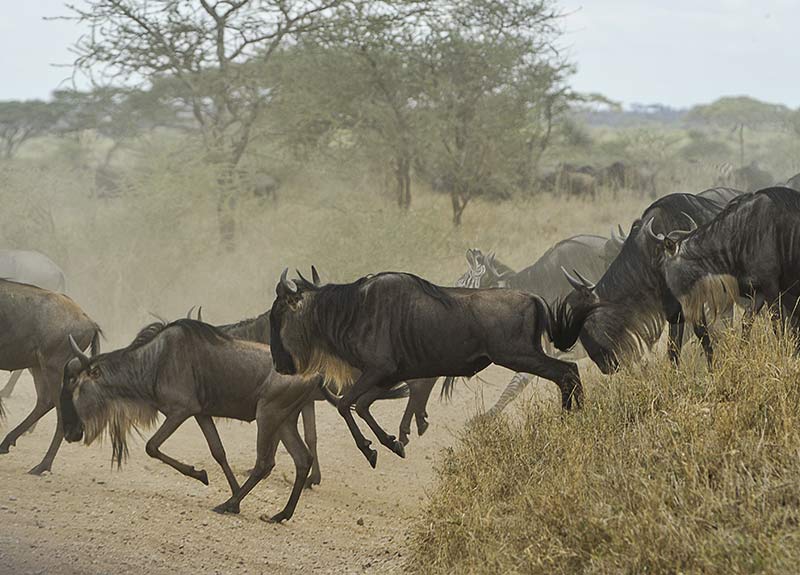 Leave the central Serengeti area with its Masai and Simba kopjes behind and drive towards the northern Serengeti enjoying en-route game viewing. Overnight at Bologonja Mobile Camp.

Northern Serengeti National Park
The far north of the Serengeti National Park is where you’ll find the wildebeest migration between end of July and October. The Mara River – bristling with crocs – divides this wild part of the Serengeti from the Masai Mara in Kenya and its here that you’ll find the herds when the southern plains get too dry. The northern section of the Serengeti looks quite different to the south and western areas. This is an area of gentle undulations cut by numerous streams, which reveal the underlying granites in the area. A good stretch of the Mara River cuts right through this northern area of the Serengeti, a stunning region of kopjes, open plains, sporadic woodland and riverine vegetation. One of the sights people particularly hope to see is the wildebeest crossing the Mara River, most likely between July and October, depending on weather, as the herds actually spend a good deal of time crossing the Mara back and forth in search of the best grazing. It’s an impressive sight to see hundreds of thousands of animals plunging into fast flowing water and braving some very large crocodiles in the process. That said, actually finding a crossing is very difficult and largely a matter of both luck and patience as a herd may look as though they’re about to cross, only to decide on an apparent whim to turn round and go home.

Enjoy your full days in the Northern Serengeti with morning and afternoon game drives (or a full day game drive – your choice). Overnight at Bologonja Mobile Camp.

Enjoy breakfast at the lodge with en-route game drives to the airstrip for your flight to Arusha airport. Transfer to Kilimanjaro airport with a picnic lunch for your flight home. 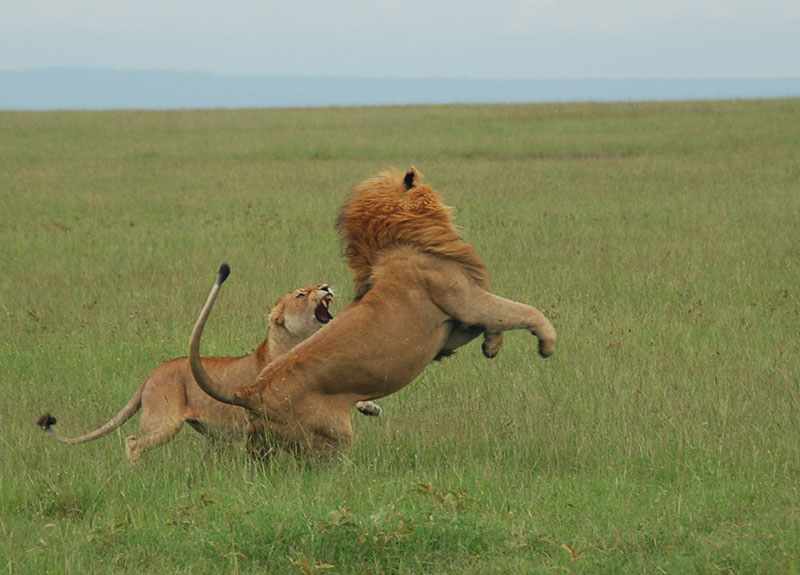